Chua Chin Hon, an expert in data science, media, and politics, built a data model at the beginning of October to accurately predict the outcome of the 2020 election.

To achieve this, he aggregated forecasts of the Electoral Vote count from FiveThirtyEight and The Economist, leveraging the work already done by other US outlets to combine with independent data analysis.

As soon as the forecast was finished, news broke that Donald Trump had tested positive for Covid-19. In the words of Chin Hon, election forecasting is both art and science. But in the current unpredictable and volatile environment, can data and algorithms produce reliable forecasts?

With all the technological advances in data and predictive technologies, it’s interesting that in 2020, the outcome of elections around the world are still a surprise.

Shouldn’t the surveys and polls be sophisticated enough in this day and age to give us accurate predictions?

Also, with all the behavioral and sentiment data on the internet, isn’t there a way to process all of it to predict what the outcome will be? The Economist is one of the most reputed sources of forecasting in the industry. Their data models are updated every day and include analysis of polling, economic, and demographic data to predict America’s elections.

Having said that, on the morning of November 8th 2016, the morning of the previous US election, their headline read: “Hillary Clinton has got this. Probably. Very probably.”

US Election Predictions: What data sources can give us relevant information?

AI data processing startup Rossum has done an exceptional job in analyzing ad spend on the electoral campaign. With impressive Tableau dashboards to visualize spend by city, by state, and by date.

They applied artificial intelligence to analyze all of the 25,000 political advertisement orders submitted in real time to the FCC. However, is this really going to help us predict a winner?

Traditionally, the party with the biggest marketing budget has won the election. However, the 2016 election became the first election in which the party with significantly lower ad spend won.

In the last election, SimilarWeb provided web traffic analysis to predict who’d win based on internet behavior on the candidates’ sites – as well as the browsing experience that lured them to their respective sites.

Once again, Hillary won the web traffic war. So is web traffic a relevant predictor of success?

One of the biggest technological shifts in the world in the past decade is the emergence of social media, which means every human being is their own broadcaster.

Many researchers and data analysts have turned to Twitter as the platform that may hold the “holy grail” data to predict the result of an election. There are countless studies that explore the social network and its accuracy to forecast political results.

Back in 2013, an Indiana University study found a statistically significant relationship between Twitter data and US election results. Specifically, the study found a correlation between the number of times a candidate for the House of Representatives was mentioned on Twitter during the electoral campaign and their performance in that election. The more a candidate is mentioned on Twitter, the better.

A different study from Dublin City University in 2011 found that tweet volume was “the single biggest predictive variable” in election results, a finding that was echoed in another study conducted by the Technical University of Munich: “The mere number of tweets reflects voter preferences and comes close to traditional election polls.”

The volume of tweets might have been a consistent indicator of candidate performance; however, it wasn’t the case in the 2016 US Presidential election. Despite Trump being by far the most mentioned candidate, he actually lost the overall popular vote. 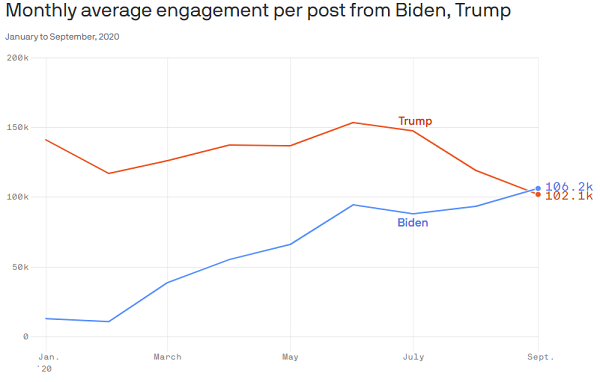 Of course, sentiment analysis of these tweets is also crucial since just a mention isn’t necessarily a positive one. Kajal Yadav, a talented data scientist, did a fun project to predict the election result using Twitter sentiment analysis with Python.

She collected replies on recent tweets from Donald Trump and Joe Biden and analyzed the sentiments of people towards them. Unfortunately the results, while very interesting, are not necessarily conclusive.

US Election Predictions: Who is most likely to get predictions right?

Instead of waiting for the result, us humans love finding ways and people that will help us predict the future. Tarot readers, shamans, witches, astrologers. The list is endless.

The stock market’s time-tested “presidential predictor” was right about who would win the election in 2016. Even when the polls pointed to a victory by Democrats, the S&P 500’s 2.2% decline in the three months leading up to the election signaled that Trump would defeat Clinton.

This time round, their final prediction is that Joe Biden will win the presidential election. 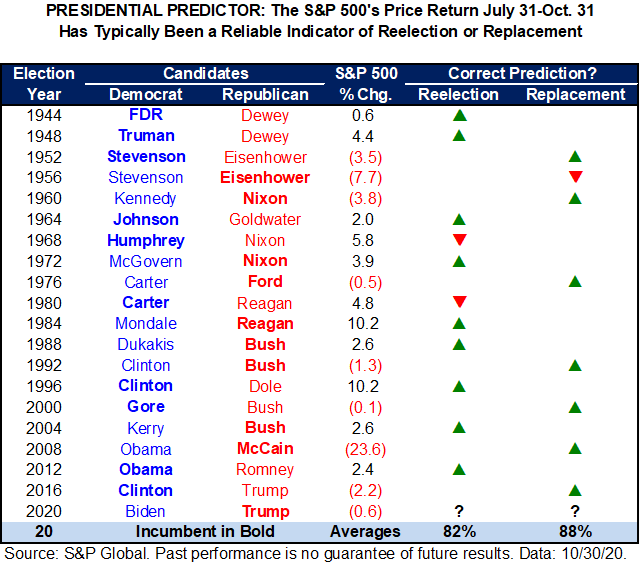 One of the most fascinating and challenging elements of creating accurate predictions and forecasts is the ability to choose the right data sources and data points.

When obvious indicators, such as social mentions, web traffic or ad spend become less relevant. Who do we turn to?

Since 1996, the company Spirit Halloween has correctly predicted the result of the US Presidential election based on which candidate’s mask ends up selling more.

Respected Indian astrologers concur that it will be Donald Trump walking into the White House to take office as the next US President.

Acharya Umesh Tiwari, an astrologer based in India and Dubai told Gulf News, “Sitting in the second house Jupiter is expecting the 10th house of his chart where Sun is placed. Sun is a planet of authority and power. And with the blessings of Jupiter, it is pretty much exalted. A person with such yoga will be in authority and power. He will be a ruler.”

Hon. President Mr. @realDonaldTrump Your #horoscope indicates that you will come back again as US president as per Dr. Shankar Charan Tripathi who is a well-known fortune teller.#All_The_Best #India pic.twitter.com/UievWIuW7P

Could it be possible that a Halloween costume store or Indian astrologers are looking at more relevant data points to predict the next US president than the stock market?

We will find out very soon.